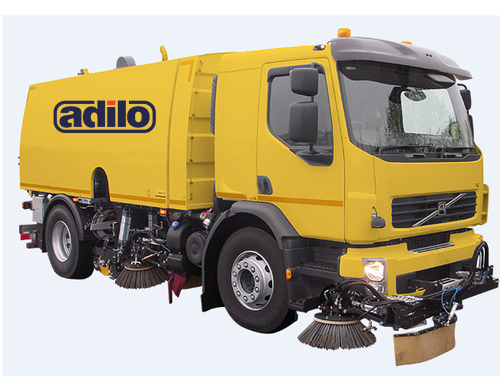 The SRS (Speed Runway Sweeper) airport sweeper is a further development of the SRS airport sweeper, which has been a worldwide success. Safety at the airport is top priority. The high-speed Runway sweeper cleans all service and traffic areas of the airport with outstanding sweeping efficiency, so that follow-up damage caused by foreign objects is prevented. The Runway is suitable for professional use at both civil and military airports and is extremely versatile in everyday operations. It combines all important functions in one machine.

The high quality sweeping unit with the flow optimized suction port and the rotary brush has a sweeping and suction width of 2,300 mm. A debris flap is optionally available to pick up larger objects, such as beverage cans or bottles. Water and other liquids can be collected by means of the SHS suction vehicle. In order to guarantee more efficient collection of liquids, the suction nozzle can be equipped with a liquid flap. The two circular brushes have a sweeping width of up to 3,500 mm. Furthermore, the Runway can be equipped with blast nozzles. The blast nozzles conduct a strong air stream onto the traffic area, so that large surfaces are cleaned and dried in one single operation.